RTVE is the largest audiovisual group in Spain with more than 6.000 employees. It is 100% state-owned and it is financed by central state administration and other sources. RTVE is composed of TVE, RNE and rtve.es. TVE is the division responsible for the television channels, while RNE deals with radio channels and rtve.es, which was created in 2008, is the largest Internet website with news, TV series and programmes on demand in Spanish language with more than 21.3 million unique users (January 2015).

VisualMedia will allow TVE to combine Social Media, augmented reality and the latest tracking and gesture techniques to improve the audience´s experience. We are going to test the system on the weather forecast TV show called “El Tiempo”.

“El Tiempo” brings the latest weather news and the forecast, having an audience in both day and night shows of over 4 million viewers. As a part of the show, there is a contest to select the most beautiful Spanish weather landscape among the audience’s photographs sent to RTVE during the week. The procedure is the following, the RTVE´s weather team selects each day the 4 most representative photographs among all received (usually more than 500 per day) which are broadcasted during the show, while a public opinion poll is being taken to choose the nicest photo each day. On Friday, there is a final poll to know the winner of the week.

VisualMedia will integrate and make automatic all procedures that nowadays are manual and independent (open emails, save photos, send them to the screens located in the set, opinion polls, etc.). Therefore, VisualMedia platform not only will be able to collect and open the received photos and metadata from the audience mails, but also to facilitate the weather team task of selecting and previewing them in a carousel and automatically sending the most representative photos chosen to the graphics engine to be shown on the set during the contest in augmented reality. The weather team will also be able, by using the same platform, to configure the diverse parameters of the graphics engine. Moreover, augmented reality will use a tracking system that won’t need devices at the camera or across the set, what makes it simpler and fast to install. To complete the system, the anchor will be able to interact with VisualMedia without any device thanks to the gesture recognition integrated in the system.

All these features makes Visual Media a very functional system that will provide a very dynamic interaction with the audience, enriching the course of a show. 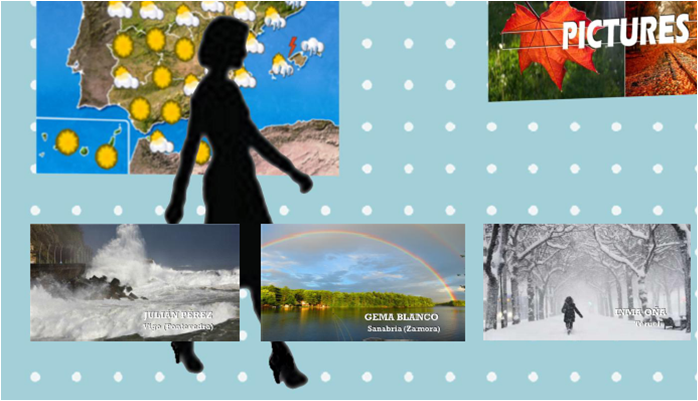