Over the years, BlueSky TV has established its identity as an independent news and politics broadcaster seeking for its viewers’ active involvement in show productions.

Participation in Horizon 2020, VisualMedia project is perceived as the opportunity to enhance current viewers’ experience while on the same time attracting younger audiences in its incumbent programs i.e. political talk shows ideally with more than one guests representing different positions and tendencies. BlueSky contributes to VisualMedia as an established broadcaster (end user) integrating the new capacities offered into its most acclaimed political talk show: Παρεμβάσεις (Interventions). 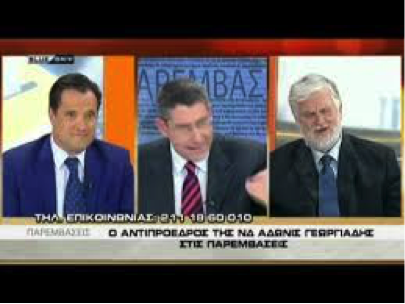 Παρεμβάσεις (Interventions) is a daily political talk show that can host up to 8 guests and the presenter.

It lasts for something less than 2 hours and it is structured in four independent sections each posing a different question to the general public as well as the panel.

The goal is for the general public to “intervene” (hence the title) as much as possible in the discussion and for the panel to reshape the public opinion.

Usually the guests represent the entire political spectrum in Greece, however there are occasions when the show is run in a form of a debate with only two guests one representing the government and the other the opposition.

BlueSky’s strategy for augmenting its share of audience is to attract the younger generation of spectators.

Technology wise we will implement the following: 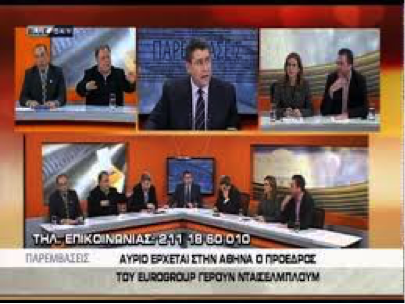 3D Graphics: Posts and user-generated content will be presented with the use of a rotating cube and a frame.

Gesture Recognition: The presenter will make the cube and the frame appear and disappear using his gestures.

Tracking: We would like to have zoom ins to the presenter and zoom outs with 3D object suitably adapted to each setting.

Next season, starting from October 2017 will find BlueSky introducing for the first time in the Greek market, even at a pilot stage, 3D graphics resulting from user generated content through social media.